For such a small country, Portugal packs a punch. From cosmopolitan cities and out-of-the-way towns and villages, to lively beach resorts and spectacular national parks, this diminutive nation offers an incredibly diverse range of visitor attractions. Occupying a wedge of Iberia and sharing a border with Spain and a fantastic coastline with the Atlantic Ocean, Portugal’s location in this sun-kissed corner of Western Europe lends it a singular appeal.

Its southern reaches remain a compelling vacation destination, renowned for gloriously sandy beaches and world-class golf courses. The country’s interior, meanwhile, offers a wealth of contrast: rolling plains; broad rivers; deep, verdant valleys; and remote mountain ranges. Defining Portugal’s history is an amazing collection of monuments and historic buildings, many of them recognized by UNESCO as World Heritage Sites. And underpinning the country’s personality is its people – open, friendly, and hospitable. Spend some time traveling the country, and you’ll be enamored by the color, flavor, and warmth of its character.

For help planning your trip, see our list of the best places to visit in Portugal.

Lisbon, the capital of Portugal, is one of Europe’s most alluring cities. Set on the banks of the River Tagus, this vibrant Atlantic port is scattered over a series of hills that heighten its splendid waterfront location. Exploring the city’s historic core is a journey into its fascinating past – a heritage exemplified by celebrated visitor attractions, such as the mighty Castelo de São Jorge and Alfama, the oldest part of Lisbon.

A collection of world-class museums extends the cultural experience. To the east, away from the city center, you can marvel at the modernity of Parque das Nações and its crowd-pulling sites such as the brilliant Oceanário. Across to the west in Belém, Portugal’s golden Age of Discovery is mirrored in the magnificent Mosteiro dos Jerónimos and the quirky Torre de Belém, both UNESCO World Heritage Sites.

In between, you can amble across handsome tree-lined squares; stroll along broad, riverfront esplanades; or take in jaw-dropping panoramas from the various miradouros, or viewpoints, dotted across the city.

Enchanting Sintra is one of the gems in Portugal’s glittering sightseeing crown. Recognised by UNESCO for its remarkable cultural landscape, this historic and captivating town is definitely worth putting aside a full day to absorb. It’s one of the most popular day trips from Lisbon. Clustered under the lip of the wooded Serra da Sintra hills, the town is dominated by the landmark Palácio Nacional, its signature twin chimneys looming over a pretty square edged with houses painted in a palette of pale pink and ochre with splashes of yellow.

Peering down over this picture postcard setting is the ancient Castelo dos Mouros, seemingly hewn out of the granite escarpment it runs along. Crowning the highest hill is the bewitching Palácio da Pena, used in the 19th century as a summer retreat by the Portuguese royal family. Sintra offers plenty of hiking trails for the avid walker, but you’ll need a stout pair of legs to conquer the demanding hills surrounding the town. The highest points of the serra offer breathtaking views across the Atlantic coastline and distant Cascais.

With its robust granite architecture and commercial disposition, Oporto (or “Porto”), Portugal’s second city, rewards visitors with a very different experience to that of the capital. Sited at the mouth of the River Douro and blessed with a waterfront – the Ribeira – acknowledged by UNESCO as a World Heritage Site, Porto is a destination endowed with Baroque churches and Neoclassical buildings that number some of the best examples of their kind in the country. Of particular note are the needle-like Torre dos Clérigos and the imposing Sé, the city’s cathedral.

Another landmark structure is the iconic Ponte Dom Luís I, the spectacular double-decked iron bridge that spans the Douro and connects the city with Vila Nova de Gaia. A leisurely stroll along the Ribeira delivers a tangible sense of history, where you can breath in the briny atmosphere of the place.

The river provides a scenic route to the Douro Valley, a verdant landscape of terraced hillsides dotted with hamlets and villages. A popular sightseeing option is to join one of the many cruises that ply the meandering waterway.

Deep in the heart of the Alentejo is Évora, one of the most beguiling destinations in Portugal. Renowned for its amazing ensemble of well-preserved monuments, Évora deserves close and unhurried scrutiny. Its medieval walls enclose centuries of history, a timeline illustrated by the impressive Templo Romano, which dates from around the second century; the brooding but compelling 12th-century Sé (cathedral); and the Igreja de São Francisco, with its lugubrious Capela dos Ossos, completed in the mid-1550s.

The historical significance of Évora and the unspoiled condition of its architectural treasures has won it coveted UNESCO World Heritage Site status. But you’ll also be taken with the city’s delightful market-town ambience and down-to-earth personality: it’s a pleasure to wander and shop through its Moorish alleys; browse engaging museums; and lunch in attractive squares, where you’re considered a guest rather than a tourist.

What does a king give his queen for a wedding present? For the lucky queens of Portugal, it was the achingly pretty town of Óbidos, a custom that prevailed for hundreds of years. These days, it’s gifted to the general public, and it’s certainly worth the hour’s drive north out of Lisbon to reach it. Óbidos is an artist’s dream. An assortment of whitewashed cottages, cafés, and handicraft stores lining a series of narrow, cobbled streets are completely enclosed by sturdy medieval walls.

There’s also the Igreja De Santa Maria, which features a wonderful interior of blue and white 17th-century azulejos (tiles). A museum on the town’s attractive square includes rare works of art by the 17th-century painter, Josefa de Óbidos. You can walk along the top of the battlements for lovely views over the terra-cotta rooftops and the lush plains beyond. The fortifications form part of the landmark castle, whose keep looms guardian-like over the charming scene below. The castle itself is now a pousada, an upscale period hotel.

Cited by many a guidebook as the most captivating town in the Algarve, Tavira does indeed tick all the scenic boxes. The Rio Gilão cuts a smile through this pleasantly laid-back town, with a Roman footbridge connecting one side with the other. The waterfront makes for a wonderful walk, before or after you’ve uncovered the rest of Tavira’s historic treasures. The castle walls provide glorious views across the old town and the nearby coast. You can also explore the Igreja de Santa do Castelo, the grandiose church where warrior knights are entombed.

The town also boasts a fascinating museum, the Núcleo Islâmico. Highlights include a rare 11th-century figurative vase. An appealing option, especially during the hot summer months, is to visit the offshore Ilha de Tavira, an enormous beach that, even in high season, has plenty of room to spare. It’s reached by passenger ferry from a jetty at Quatro Águas.

The Algarve is justly famous for its pristine coastline, and one of its natural wonders is the Parque Natural da Ria Formosa. This protected marine habitat constitutes a 60-kilometer stretch of marshland, saltpans, shallow water lagoons, and sand dune islands that run from Quinta do Lago east past Faro all the way to Cacela Velha.

A haven for an abundance of flora and fauna, the park is crisscrossed by a series of nature trails with proximity to some of the animals associated with this region of Portugal. From observation hides built on the lakes, bird-watchers can spy species like the rare purple gallinule, while out on the mudflats, flocks of greater flamingo can be admired. On land, look out for the delicate sea daffodil and flourishing goosefoot and, if you’re lucky, the Mediterranean chameleon.

One of the walks passes the renowned San Lorenzo golf course, itself a draw for all sorts of birdlife. The park’s headquarters are near Olhão, where visitors can pick up maps and information leaflets.

The historic hilltop university in Coimbra is just one reason to visit this venerated Portuguese city. But the wealth of additional visitor attractions, much of them clustered around the Velha Universidade, classified by UNESCO as a World Heritage Site, merits a full day’s sightseeing. The undoubted highlight of a tour of the old university campus is the stunning Biblioteca Joanina, a Baroque gem of gilded and marbled wood and frescoed ceilings. You can also climb to the top of the 18th-century clock tower for a giddy perspective over the entire area. Your exploration should include the imposing late 12th-century Se Velha (old cathedral).

Back in the old town below, there are further historic buildings to discover, among them two former convents and the Igreja de Santa Cruz, consecrated in 1131, which contains the tomb of Portugal’s first king, Afonso Henriques. Elsewhere are a number of interesting museums; a botanical garden; and the fun-filled Portugal dos Pequenitos, a park containing scale models of the country’s most prominent traditional buildings. And the river itself is a pleasant diversion, with a broad esplanade flanking both banks – great territory for long, lazy walks.

For good reason, the highest peaks on mainland Portugal, the Serra da Estrela, are called the “star mountains.” Rising to 1,993 meters above sea level at its highest point, the range, or more precisely the plateau, is a dramatic natural feature of central Portugal. It is often snowcapped in winter, when opportunistic skiers take advantage of what is probably the shortest ski season in Europe.

Otherwise, the granite escarpments and glacier-cut valleys are classic hiking country, with a network of signed long-distance paths and tracks covering the terrain. Along the way, walkers can take in some absolutely stunning countryside and absorb the traditional character of the place, epitomized in villages like Linhares and Valezim.

The mountains are home to the Serra da Estrela sheepdog, a breed unique to Portugal. You are bound to come across proud locals walking one of these powerful but mild-mannered dogs. The area is also known for the deliciously rich and creamy Serra cheese – arguably Portugal’s finest cheese. Look for it on sale in the stores that serve many a local village. 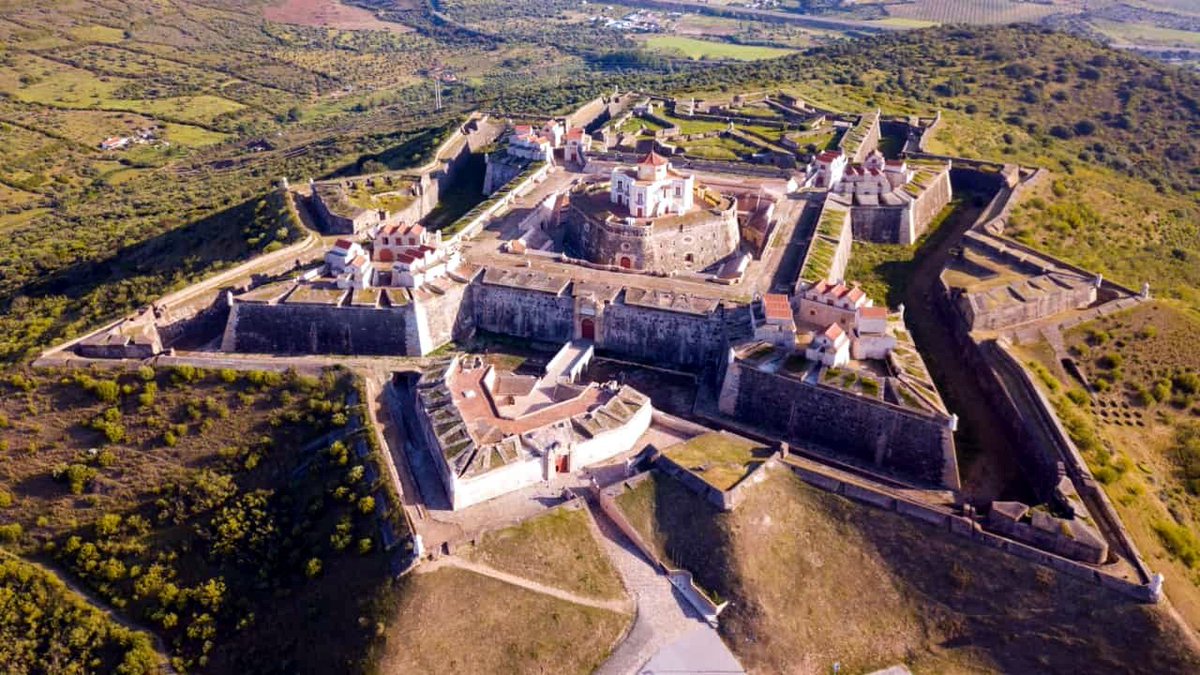 The heavy, star-shaped walls that make up the military fortifications surrounding Elvas are among the best-preserved examples of military architecture in Europe. In fact this frontier town, set on a hilltop in the Alentejo, 15 kilometers from the border with Spain, is so remarkable for its mid-17th-century defences that UNESCO has declared Elvas a World Heritage Site.

It’s a long drive east (and should perhaps be combined with a visit to the nearby Spanish city of Badajoz), but those making the effort to reach this fascinating destination will be rewarded with a truly imposing circuit of walls, deep moats, and star-shaped ramparts. Within this impregnable ring lies a warren of steep, cobbled streets and a number of worthy visitor attractions, notably the Igreja de Nossa Senhora da Consolação, whose nondescript façade belies a truly glittering interior.

A castle, set on the north wall, affords fine views over the area and takes in two smaller outlying forts and the Aqueduto da Amoreira, the town’s impressive 16th-century aqueduct.